A 323-room Tribute Portfolio-Element hotel project is under development at 299 N. Federal Highway in Fort Lauderdale and is slated to open in second quarter 2018.
Aug. 10, 2016 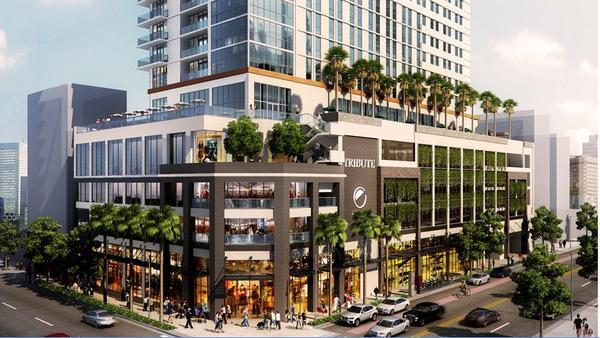 Development plans for the site, at 299 N. Federal Highway, include a 24-story building with a 209-room Tribute Portfolio hotel and a 114-unit Element property inside, according to Wurzak Hotel Group.

"You can expect to see trucks [and activity] on the property by next week Monday," said Jake Wurzak, principal and development director of the Philadelphia-based developer. "We have all our permits in place."

Construction is expected to take about 18 months to complete for a targeted opening in the second quarter of 2018, Wurzak said.

Wurzak Hotel Group and its brand partner, Starwood Hotels & Resorts Worldwide, first announced plans for the Fort Lauderdale dual-branded hotel project in July 2015. Groundbreaking was initially scheduled for last fall but was pushed back due to permitting delays.

As construction nears, the developer is also revealing the official name for the Tribute Portfolio hotel: The Dalmar.

"Dal" is a concise reference to the hotel's Fort Lauderdale location, while "mar" is a subtle nod to the city's coastal geography, said Wurzak Hotel and its creative partner, DesignAgency.

Starwood launched Tribute Portfolio in April 2015 as its 10th brand, to bring together a collection of independent hotels and resorts with four-star service and upscale amenities. The brand had nine hotels including four in North America as of July 26, according to Starwood.

The boutique Tribute Portfolio hotel will include design elements similar to Starwood's trendy W brand and offer several "cool spaces" to hang out, Jake Wurzak told the Sun Sentinel in a December interview.

Upon arrival at the dual-branded hotel, customers will enter through a shared, street-level entrance and take elevators to their respective lobby levels. Check-in will be on the sixth floor for The Dalmar guests and on the fourth for Element.

The Dalmar will have a rooftop lounge and sky lobby, an infinity pool with landscaped deck including a garden relaxation area, and about 24,000 square feet of meeting and retail space, Jake Wurzak said. On the ground floor will be a coffee bar, 6,800-square-foot restaurant and a 4,000-square-foot retail space along Northeast 3rd Street.

Michael Silverman of The Comras Co., who is on the team handling retail leasing for Wurzak, said he's seeking to attract leading national and local operators for the restaurant as well as select boutique fitness and retail concepts for the rest of the ground floor.

“We feel the downtown [Fort Lauderdale] and Flagler Village corridor is a tremendous market for top tier restaurants that are looking to capitalize on the local residential population, daytime office population and hotel guests,” said Silverman, a Comras senior associate. “We have worked hard with the developer to create a restaurant space with an indoor and outdoor patio that will activate the ground floor of the property and be a strong draw in the market. “

Selection of the restaurant and retail operators is still being finalized, Jake Wurzak said Tuesday.

The extended-stay brand Element by Westin debuted in 2008, but development of the eco-friendly lifestyle hotels has accelerated in recent years in the United States. Today, there are 22 hotels worldwide, including 19 in North America.

South Florida has two Element hotels, in Miami and Doral.

Travelers staying in Fort Lauderdale's first Element hotel can expect rooms bathed in natural light with modular furniture, full kitchens and spa-inspired bathrooms, according to the developer. Element guests also will get free breakfast and evening reception with food and beverage pairings, as well as free access to bicycles.

The new dual-branded hotel is also aiming to be a popular destination for locals to shop, dine and hang out, he said.

To help achieve that goal, the developer has solicited input from the Flagler Village community on the types of retail and food and beverage options they're interesting in seeing there, he said.

"We really feel, to make it special, you have to involve the community, and the retail component will be important," Jake Wurzak said.